We may not be able to move around the world but we want to offer you the same sense of engagement and enquiry as you get on tour from wherever you are. It’s a subscription service. Membership will give you unique Insight into the places and issues we cover around the world, and keep our team together so that we can be in a position to provide tours as soon as travel restrictions are lifted.

You can pay for your subscription to Insight’s limited membership with PayPal (you can use a credit or debit card) or by bank transfer to Beyond the Headlines Ltd.  Fee options for full membership subscriptions are as follows:

For bank transfers & standing orders: Please email us at [email protected] and we will send you the bank details for Beyond the Headlines Ltd.

For online payments: The PayPal button below will take you to a different page and you can choose to pay via PayPal or a debit or credit card. Just choose if you want to pay Monthly, Quarterly or every Six months. Or you can opt to trial one session.

Payable online by PayPal (also with debit or credit card) or by Bank Transfer.

Help us to Carry On. As well as giving you a unique perspective at this critical time, Insight with Beyond The Headlines will help keep our team together so that we are in a position to provide tours as soon as travel restrictions are lifted. We will continue to give you access to our contacts and communities around the globe. And you don’t even have to get on a plane to do it!

Multiple Time Zones. We’ll rotate talks so you are guaranteed to get at least 3-4 talks a month within your time zone. If you miss a broadcast you will be able to see it online within 24 hours. These are all live and interactive – so you can put your questions directly to speakers.

Join the Debate. At the end of each session you’ll be able to exchange views on air with other members of the club, just as we do on the tours. This will give us a chance to discuss points of interest amongst ourselves. We have a great community of travellers, many with their own areas of expertise. Those views add to the quality of our debates.

Limited Membership. The new subscriptions club will be limited to just 100 peopled uring the first six months. This means you won’t be one of several hundred or thousand people viewing a discussion. You are guaranteed access and able to ask our own questions. You will also be able to propose new debates. We want to hear your ideas on what topics you would like to explore, and who you would like to hear from.

Unlike Anyone. Like our tours – the key thing you’ll get from us is access to people on the ground. We steer clear of armchair experts that populate most online forums. We have experts and access to people around the globe, so whether its speaking to someone in Soweto or hearing a North Korean defector speaking – you are guaranteed to get a unique view of what’s happening at the moment.

The Year Ahead. You can also shape where we go after lockdown. We’ll talk with you about where you’d like us to travel as restrictions are lifted. If you are interested in going to a particular country or exploring an issue we’ll aim to set up a tour around that theme.

A New Cuban Crisis – The US Embargo & Covid19

Already before the outbreak of the Covid-19 epidemic, Cuba’s economy was struggling. After a decade of halting economic reform, GDP growth remained sclerotic, and the re-intensification of U.S. sanctions under Donald Trump was intensifying existing difficulties. Now Covid-19 has forced Cuba to shut its borders to international tourism, and hard currency reserves needed for importing foodstuffs are depleted. Beyond the public health crisis—which Cuba has responded to with considerable success compared to regional peers—what is in store for Cuba’s future? Is the island on the doorstep of an economic crisis that rivals the severe depression experienced after the fall of the Soviet Union in the early 1990s?

Michael J. Bustamante, Ph.D. is Assistant Professor of Latin American History at Florida International University in Miami. He is co-editor of The Revolution from Within: Cuba, 1959-1980, published by Duke University Press in 2019. His commentary on contemporary Cuban affairs has appeared in Foreign Affairs and The Washington Post among other publications.

Documentary maker Anthony Baxter came to fame with his film on Donald Trump’s Scottish golf-course. Trump then tried to sue the BBC and prevent the film being broadcast helping the film become a major success. His most recent film is called FLINT. Made over 5 years it examiens the water pollution crisis in Flint, Michigan. In conversation with Nicholas Wood.

Israel has a new government all the while its Prime Minister is simultaneously trying to avoid jail and annex part of the West Bank. It seems the famed-two state solution is well and truly dead. Discussion with Dahlia Scheindlin and Sam Bahour.

Fleeing North Korea:  A conversation with a defector

Eunhee Park escaped North Korea at only 18. She’s part of a new generation of defectors who have fled the north surviving on their wits and surprisingly a spirit of enterprise. In conversation with Nicholas Wood and Eunkoo Lee and Casey Lafargue from Teach North Korean Refugees.

David Smith, The Sunday Times Economics Editor and Luka Gakic, an investment director with Ruffer discuss the risks of the Covid19 bailouts. Central banks and governments are spending money in a way never seen before but what will the long term impact of this be. There are some who fear it will unleash massive inflation. Others are turning that economic theory on its head.

How do you tackle Covid19 in places where social distancing and good hygiene are near impossible? We’re joined by Thulani Madondo who runs Soweto based charity the Kliptown Youth Program, John Matisonn, author of a new biography on South African President Cyril Ramaphosa and Dr. Paul Davis, who has just retired as Chairman of Aurum, South Africa’s foremost independent health charity. South Africa was quick to impose restrictions and has kept the virus in check so far but at what cost?

Join Insight to see the full video. Already a member? Email [email protected] and we’ll send you the member’s link to view it.


Just How Bad Can It Get? The Global Economic Meltdown & Covid19

How much damage is being done to the global economy and what are the possible political and economic outcomes?

Prof. Jeremy Jennings from King’s College London and Tom Elliott, former market strategist with JP Morgan Asset Management  assess the damage being done to the global economy. Both suggest that this is likely to be the most significant political and economic crisis of our lifetimes. They’ll also ask how quickly we will recover.  There’s an alphabet soup of answers. Will it be a U, W or even worse a “long slow reverse J”?

Tom Elliott helps clients understand the economic and political influences that drive capital markets, which in turn drive investor returns. Tom, formerly an Executive Director at JP Morgan Asset Management, has 25 years experience in the financial sector. He is currently a visiting lecturer in the department of political economy at King’s College, London.

Professors Jeremy Jennings is Head of the School of Politics & Economics at Kings College London. Previously he served as Head of Department in Birmingham and at Queen Mary, was Vincent Wright Professor at the Fondation Nationale des Sciences Politiques in Paris in 2006 and was also a visiting fellow at the University of Columbia Research Centre in Paris. Jeremy holds a visiting professorship with the Fondation Nationale des Sciences Politiques. 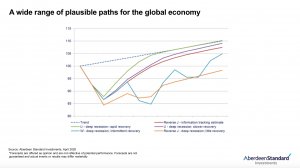 Art vs Propaganda; Culture in North Korea with Nick Bonner

Few outsiders know North Korea as well as Nick Bonner. As the founder of North Korean travel specialists Koryo Tours he has an unparalleled range of contacts in the hermit-like state. He also owns one of the best North Korean art collections outside of the DPRK and has worked with artists and cinematographers there for many years. It’s enabled him to build up a rich and nuanced understanding of the most authoritarian state on earth.


Extraordinary times require extraordinary measures. In Hungary Prime Minister Victor Orban now has the power to rule by decree and anyone who spreads “false rumours” can face jail time of up to 5 years. The new law has caused an outcry from civil liberties advocates who say it may have a lasting impact. Elsewhere governments around the world are introducing steps that would in normal times provoke a public outcry.

Nick Thorpe, BBC Central Europe Correspondent, based in Budapest. He outlines Victor Orban’s latest steps and describes how Hungary’s nationalist Fidesz party is hoping reshape the EU its own image.

Gerald Knaus, Founder of the European Stability Initiative, one of the most influential think tanks in the EU at the moment. The ESI says the EU needs to find a way to stop countries like Hungary undermining democracy. Its latest paper argues European financial aid for the economy after the pandemic should have strings attached.

Boris Kalnoky, Budapest based correspondent for the German newspaper Die Welt who has covered central and south eastern Europe since the 1980s. He believes the criticisms made of Hungary and other states are overblown. It’s time for the preaching from Brussels and elsewhere to stop.

Lebanon based reporters Leena Saidi and Nicholas Blanford discussed the impact of Covid19 on a state already struggling to cope with significant problems. Before the onset of the pandemic the government in Beirut had just defaulted on part of its colosal national debt. Nationwide street protests brought the previous government to its knees. And on top of that it is home to at least 1.5 million Syrian refugees. How do measures like quarantine work in these conditions? Is there an alternative approach?

Tobias Jones on Italy: Life under lockdown, Life after Covid19

Author and Parma based reporter, Tobias Jones, discusses the impact of Covid19 on Italian society and looks at the implications for the country beyond the pandemic. Like much of Europe, Italy looks set to go into a deep recession. There is much anger at the EU for what many Italians see as the block’s failure to help them in their hour of need.

(Sound only for first minute)

It now seems clear that the United States is set to become one of the hardest hit countries by the coronavirus despite the advanced warning it has had from China and Europe. Similarly 102 years ago the US was hit by a similar crisis. While the world has obviously changed enormously, not least in terms of medicine and technology we are interested to know what parallels there are here, and our focus here is how government at the state and federal levels have reacted.

Nancy Bristow is Professor of History at Puget Sound University and Author of American Pandemic: The lost Worlds of the 1918 Influenza Epedemic.

David Swenson, Professor of Economics at Iowa State University, Ames, Iowa. We look at the emerging economic impact of the coronavirus pandemic in the US.