Why travel to Cuba now? Insight from our tour expert Michael Bustamante

Why travel to Cuba now? Insight from our tour expert Michael Bustamante 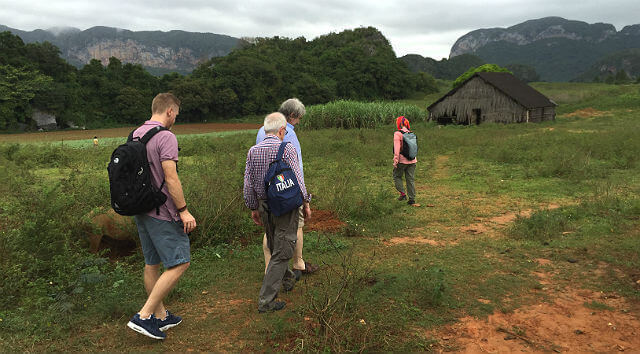 “Frozen in time.” “Socialist theme park.” “Anti-American bastion.” These are only some of the stereotypes that come to mind when one thinks of Cuba. But beyond the old cars and clichés lies a society hanging in the balance.

Raúl Castro is slated to step down in early 2018, leaving behind a decade of significant, if piecemeal, economic reforms. Meanwhile, the process of normalizing relations between the United States and Cuba appears in jeopardy. After two years of expanding bilateral ties and rising expectations for islanders and outsiders alike, President Donald Trump has threatened to re-tighten the embargo. Or tomorrow, in a tweet, he could reveal his preference for building the next beachside Cuban hotel.

In short, just two and a half years after Cuba became globally “in style,” the island is barreling toward an uncertain period of transition. Add in the fact that Cuba’s GDP actually decreased in 2016—despite an unprecedented boom in tourism—and Cuba is facing its most complex external and internal landscape in over ten years.

The economic reform agenda has stagnated. Big problems, like a vexing dual currency system, remain unresolved. Cubans, too, are debating the contours of their political future in ways big and small. Economic realities will likely remain the leading drivers of change. But with Cubans no longer as able to migrate to the United States as easily as in the past (thanks to a late Obama administration move to remove a long-standing immigration policy exception), economic pressures could also contribute to new political demands.

Join Political Tours on our Cuba Tour 2018 to get an up-close, content-rich look at the Cuba beyond the tourist veneer, the one where real Cubans live, caught between a desire to ward off the worst of what global economic insertion might reap, but also their recognition that continued change must come.

Meet economists advising the government on how to strategically open to foreign capital. But also speak with artists serving to remind Cubans of nationalist historical legacies that must not be forgotten. Dine in some of the impressive new small businesses that Cubans have opened over the last five years (working in tough conditions). But also visit local markets and farms to discuss how the pressure to fill tourists’ plates is increasing the price of produce for average citizens.

Perhaps most importantly, discuss with a wide range of Cubans just how important the island’s relationship with the United States is or is not to its future, as well as what the consequences of renewed confrontation with the North might be.

Last year, Political Tours happened to be on site for Fidel Castro’s memorial. While we cannot promise such a coincidence this year (nor did we in 2016), the 2018 trip will come just weeks after Raúl Castro is expected to retire as head of state. The degree of continuity and/or change to follow remains up for debate. But with Political Tours, you will get a privileged view of his successor’s crucial first steps.

Michael J. Bustamante, Ph.D (@MJ_Busta) teaches Latin American history at Florida International University in Miami and has been traveling to Cuba since 2005. His writings on Cuban and Cuban-American affairs have appeared in Foreign Affairs, NACLA Report on the Americas, and the Washington Post, among other publications. He is co-editor of the book “New Histories of the Cuban Revolution,” currently under contract with Duke University Press. He received a Ph.D. from Yale University and previously worked for the Council on Foreign Relations, a non-partisan think tank, in Washington, D.C. This will be his third year working with Political Tours.

Claire Boobbyer (@claireboobbyer) is a travel writer, editor, photographer, and all around Cubaphile. She has been traveling to and writing about Cuba since 1998, and she was the lead contributor to Frommer’s EasyGuide to Cuba. Her most recent travel writing on Cuba has appeared in Telegraph Travel and the Guardian. This will be her second year working with Political Tours.

Previous postTours for 2017
Next postNYT on Korea and Upcoming Talks