Following the success of our experts weekends in 2018 and 2019 we gather again in the comfort of one London’s most famous Clubs to hear some of our best speakers give their views on the world. A raft of new experts will be flying in. We’ll tackle the big issues of the moment… a stimulating and comfortable refuge perhaps.

First full day of discussions. Email us for full program.

Accommodation for 2 nights is available at The Travellers Club from £650.00 including breakfast.

Rooms are limited, please contact us to book your place and your accommodation.

Elisabeth Kendall is Senior Research Fellow in Arabic and Islamic Studies at Pembroke College, Oxford University. Her current work examines how militant jihadist movements exploit traditional local Arab culture(s). Previously, she held positions at the Universities of Edinburgh and Harvard as well as serving as Director of the Centre for the Advanced Study of the Arab World, a UK government sponsored initiative aimed at building Arabic language-based research expertise.

In addition to lecturing at numerous universities and think tanks around the world, she has been invited to present her research to the following state institutions: House of Commons, House of Lords, FCO, GCHQ, Home Office, MOD, SAS, NATO, US State Department, US Central Command, EU Council and various intelligence and security audiences around the world. She features regularly in the international television, radio and print media, including BBC, Al Jazeera, CNN and various European national broadcasters.

She is the author or (co-)editor of several books, including ReClaiming Islamic Tradition (2016), Twenty-First Century Jihad (2015) and Literature, Journalism and the Avant-Garde: Intersection in Egypt (2006). She also conceived of and edits the “Modern Middle Eastern Vocabularies” series, which includes the titles Security Arabic, Intelligence Arabic and Media Arabic.

Shanker Singham chairs the Technical Panel of Prosperity UK’s Alternative Arrangements Commission. He is is the CEO of Competere, head of Trade at the Centre for Economics and Business Research, a senior advisor to Huntsworth and Grayling, and Director of the International Trade and Competition Unit at the Institute of Economic Affairs. He is the author of a General Theory of Trade and Competition; Trade Liberalisation and Competitive Markets and a frequent speaker, author and commentator.

Tobias Jones is an author, journalist, broadcaster and woodsman. An authority on all aspects of contemporary Italy, he has published both travel books and novels set in the country. He’s written and presented documentaries for the BBC and, in Italy, for RAI. He’s been a columnist for the Observer and Internazionale and is currently the warden of Windsor Hill Wood, a woodland shelter for people going through a period of crisis in their lives. He writes extensively about communal living and new monasticism, and is known to be passionate about Fabrizio De Andre, Ross MacDonald, carpentry, bee-keeping and pig-rearing. His ambition is to produce his own woodland ham to rival Parma ham.

Tobias is the author of four works of non-fiction, including the bestselling The Dark Heart of Italy and Blood on the Altar and three crime novels set in Italy. His latest book Ultra was published this year. Italy’s ultras are the most organised and violent fans in European football. Many groups have evolved into criminal gangs, involved in ticket-touting, drug-dealing and murder. A cross between the Hells Angels and hooligans, they’re often the foot-soldiers of the Mafia and have been instrumental in the rise of the far-right.

A former columnist for the Observer and Internazionale, he writes regularly for the British, American and Italian press. He plays football for the England writers football team, and has taught writing and journalism at a variety of universities, prisons and charities.

Charlie Gammell is an historian of Afghanistan and Iran who specialises in Iran-Afghan history and relations between those two countries. Educated at Oxford and Cambridge, his MPhil thesis looked at the development of Shia political ideology through studying religious sects in Iran’s Constitutional Revolution.

He has worked in Afghanistan and Iran since 2009, interpreting Farsi and Pashto for the ICRC, advising UNESCO on cultural and historical projects, and carrying out research for a book on the history of the city of Herat. The book, to be published by Hurst & Co. in 2016, is entitled The Pearl of Khorasan: Herat from Chingiz Khan to Ismail Khan. It traces the city’s history from the arrival of the Mongols in 1221 to the present day. It seeks to place Herat in its historical context as a disputed city with Iranian and Afghan influences, but one that is very now much firmly situated in the Afghan state.

He has been published in Asian Affairs on Herat’s place in a modern Afghanistan, and has contributed to the Afghan Analysts Network on Herat’s recent history.

Robert Paduchik is an accomplished strategist with three decades of experience leading political and public affairs campaigns. Most recently served as the Ohio State Director for the Trump-Pence presidential campaign. Notably he ran Ohio for George W. Bush in both 2000 and 2004. He was the Campaign Manager for Ohio Senator Rob Portman’s successful campaign for U.S. Senate in 2010, and was the Ohio State Director for the Bush-Cheney presidential campaign, helping President Bush carry the state both times. He is recognized by many political professionals as one of the “outstanding campaign managers in America” and an expert in Ohio politics.

Bob has gained extensive experience managing public affairs campaigns in the energy, telecommunications, and chemical industries. He is a proven leader of multi-million dollar initiatives both nationally and at the state level. From 2011 through 2015, Bob worked in a variety of roles at the American Coalition for Clean Coal Electricity, a trade association representing the coal-fueled electricity industry. From October 2001 to January 2003, Bob served as the Deputy Assistant Secretary for Intergovernmental Affairs at the U.S. Department of Energy.

“The location was superb. We had the exclusive use of the main house and moved around different rooms, the last of which was that used a number of years ago by the leaders of the G8.” HG, Experts Weekend

“PT can take me to tricky places I’d like to know more about – with a small group of like minded people. And they can do that impeccably.” CF, September 2017

“Tour experts were excellent! They all had their own perspective/point of view, but that´s good. We had many speakers in addition to them, so onesidedness was not a problem at all.” Israel & Palestine, September 2017 (CM)

“Political Tours is the only offer I am aware about for people who are seriously interested in politics.” September 2017 (CM)

“Political Tours introduced me to some interesting people (including fellow travelers); it took me to places and to people I would have never accessed as an ordinary tourist.” September 2017 (MS)

“It was the first time that I had been part of any tour group – it was very well run and the group members and leaders were great.” Israel & Palestine, September 2017

“As a rule, I don’t do group tours. But I make an exception for PT given the value I’ve experienced every time – and the Baltics was my 6th PT ” August 2017

“What convinced me that Political Tours would suit me was a recommendation from like minded people, as well as the locations PT explore.  Plus the size of the group:  Max 14 tour size also sounded manageable.” Israel & Palestine, Sept 2017

“Quite the most comprehensive way of finding out what makes a country and the individuals in it tick.    PT arrange access to all sorts of different people and experiences that would be impossible to access on one’s own and the organisation is excellent.     The tours aren’t cheap, but, when you consider all that is on offer, they are very good value for money.” Russia, May 2016

“A must for anyone with an interest in politics and current affairs who want to meet like minded people. I would recommend Political Tours for the detailed organisation, visits to places not usually open to the general public and for the more adventurous, the exciting countries you visit.”  CB, US Elections, 2016

“I would recommend the tours to anyone interested in current political events because the experience offered the sort of access that experienced journalists have, minus the pressure to report back of course. Also the guarantee of the company of people with similar interests.” VH, US Elections, 2016

“As usual on PT trips the speakers were of high quality and interesting . They were just the right length of time as well . Not too long so I was able to absorb a lot of information and not get overloaded . As I have already mentioned to you.” Lebanon, March 2016

“I have been on a few tours before, but not one of them compared with this one. This was by far the best. Of course, the material content, and the time and place of its setting had a lot to do with it, but there were other factors. The size and mix of each group was about right, and having both yourself, and a local expert with us was a big advantage, able to sort out en route problems too, and help set the tone and atmosphere. The tour itinerary was very detailed, and could hardly have been more so.” CB, US Elections 2016

The Travellers Club was founded in 1819 and moved to its present purpose-built clubhouse, designed by Charles Barry, in 1832. The Club has many foreign Ambassadors and High Commissioners in London among its members.

The discussions take place in stunning reception rooms – including the famous library, morning room, dining room, and members only smoking room. The library remains the heart of the club and, as well as being one of the most beautiful rooms in London, it contains the finest collection of travel books in private hands, donated by members over two centuries. 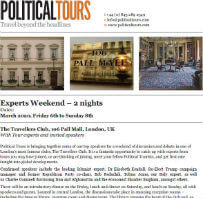 “As a rule, I don’t do group tours. But I make an exception for PT given the value I’ve experienced every time – and the Baltics was my 6th PT”
ME, August 2017