Stefanos Evripidou, news editor of the Cyprus Mail travelled to Kosovo for the first time last summer with Political Tours. It was the latest in a series of trips taken by him to look at newly emergent states. 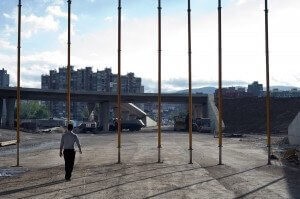 ‘It’s not the destination but the journey’ is an adage that was put to serious test when I took the nine-hour bus ride from Belgrade to Prizren, a beautiful town in southern Kosovo wedged between the mountain borders of Albania and FYR Macedonia.

The Wonder of the Balkans

The Balkans has another air about it that you just can’t find in the rest of Europe. The cities still have the old Soviet ‘social realism’ about them, while the countryside and mountains could almost be Switzerland. Except of course, they’re not.

There is always the feeling that at any moment something might happen, anything, from a sudden explosion of ethnic violence to an electricity cut or impromptu road block as a one kilometre wedding procession passes accompanied by the obligatory wedding band on an open-top truck. The most you can expect from the Swiss landscape, God’s immaculately chiselled garden, is a traffic violation by a law-abiding citizen feeling somewhat subversive.

The road to Prizren is paved with conflicting intentions, mainly over sovereignty. While the centres of power in the region, Pristina and Belgrade, continue to provide overlapping claims to ownership, one thing that is in scarce supply on this tumultuous path is a road, particularly as the bus first nears Pristina. The road seems to disappear and in its place, a stony dirt path fills in for the new highway under construction.

Kosovo declared its independence unilaterally in 2008, though it really freed itself from the yoke of Serbian forces as far back as 1999, with NATO’s help. As a ‘newborn’ state, not recognised by five EU countries including Cyprus, it is in the early stages of state-building, including road infrastructure. This hasn’t prevented it from putting up monuments of gratitude to the UK and US leadership. Bill Clinton has his own statue and boulevard while Tony Blair could definitely go ahead with a book signing in Pristina, no cancellations necessary.

The international community is heavily present in the form of the International Civilian Office, UNMIK, EULEX police and justice mission, NATO KFOR troops, OSCE and more. KFOR seems to be the biggest client of advertising agencies, with the slogan “We serve peace and progress” splashed on massive boards everywhere. They also drink a lot of coffee as there’s not too much to do nowadays other than perform military drills in places with names like Camp Casablanca. Folklore has it the Turkish contingent would also perform circumcisions if requested.

If you take the signs on the wall seriously, the impression is that the people of Kosovo are fed up with two things, the corruption of their own government and the meddling of foreign supervision.

In true western style, the international effort at state-building has created a mirror of itself, where low-level corruption is all but wiped out, saving the big honey pots for the big boys. White collar crime is so 21st century.
Kosovo police, for example, are prohibited from issuing on-the-spot speeding fines, keeping petty cash out of their hands. Instead, they are obliged to confiscate your driving licence, which you can only get back after paying a fine at the local bank or post office.

It’s not so easy to regulate the bigger fish, however, especially when millions are being pumped into the place for development projects. During a dinner with a senior Pristina official, we were told a joke about a European minister who told his visiting Kosovar counterpart how to save a little cash for himself through public works projects. Simply build the bridge that bit shorter and pocket the difference. When the European visited the following year, the Kosovar minister proudly showed him his latest project, which had helped him pocket a tidy sum. There was no bridge.

The Kosovar Albanians can laugh at themselves but they don’t pull punches when talking about their foreign supervisors either. Due to the confines of space, the cheeky joke on UNMIK will have to wait.

Kosovo leaders, however, are clearly setting their sights on the EU, and for three reasons: one, that’s what the international community wants; two, it keeps their constituency engaged, especially with the promise of visa liberalisation, and three, they know that Belgrade’s own EU aspirations will keep neighbourly relations from turning ugly.

One of the most quoted facts about Kosovo is that 70 per cent of the population is under the age of 30. This is apparent in the streets where young people fill the centres of every town and village, without that imposing air found in many other European cities. The youth are very IT savvy, and seem to have few of the hang-ups of the older generation, scarred by conflict. Their enthusiasm and idealism is unavoidable as is their hope for the future.

In Pristina, the night life is dancing to a different beat than the Euro-trash of other cities. The rap scene is huge. Rap may well stand for Really Awful Pain, but the young Kosovars seem to have blended the right mix of newborn zest with Balkan reality to create a sound and beat that would have any serious rapper shaking their head in approval.

Further south and the road reappears as do the ubiquitous half-built red brick houses. When the bus finally arrives in the historic town of Prizren the relief is palpable, at least from this author’s seat.

This picturesque town with its Serb and Ottoman legacy, stone bridges and a river running through it was once considered the cultural and intellectual centre of Kosovo. It’s easy to see why. And it could easily reclaim that title, boasting a number of mosques, Catholic and Orthodox churches and an elevated fortress. But the real jewel in its crown, the most exciting thing about Prizren, is the hugely successful international documentary and short film festival, DokuFest, held annually for the last nine years.

DokuFest’s executive director Aliriza Arenliu and artistic director Veton Nurkollari have turned a town with no cinemas into one of the most culturally vibrant places in Europe.

They have inspired the place and the people while attracting 6,000 visitors from all over the world. Dozens of youthful volunteers guide visitors around the screening locations spread across town, which include other-worldly locations like a screening on a river bed or cliffside fortress.

Prizren in August has an unparalleled atmosphere. Festival goers mix with the hordes of diaspora, or shatzi, returning (mostly from Switzerland) for summer weddings.

Watching the fantastic documentary from Laura Poitras, ‘The Oath’ which follows Osama bin Laden’s former bodyguard around Yemen, the sound of the muezzin evening call to prayer blends naturally in the open-air cinema with the film’s audio, as do the soft rustle of leaves and the snap of celebratory gunshots from a nearby wedding.

The town buzzes from morning to night, with impromptu gypsy or rock concerts staged in the early hours of the morning, cafés and bars open until the last customer leaves and US-style police on mountain bikes patrolling the streets.
Prizren is now almost all Albanian but the churches burned in the 2004 riots have been restored and remain under constant guard. Even the Orthodox priests who walk through the city centre are escorted by EULEX police, inviting the odd picture of bearded priests drinking water from a fountain while Turkish police stand protectively by.

Hitchhiking up the Sar Mountains unfolded scenes of natural beauty. A short stop at a hillside café brought us in touch with the music of an Albanian wedding band taking a short break. After invites for cups of tea and raki, we sat and listened as they sang about an only son who died on his wedding day. Only, they used more words to say it.

Over the mountains towards Skopje, one can see road signs displaying tank speed limits while red and white ad boards promote the ‘Malboro Family Restaurant’.

The overnight train back to Belgrade was painfully slow. The only joy was my cabin neighbour, an elderly Turk who studied in Belgrade. He spoke Turkish and Serbian. I spoke English and Greek. We both knew raki.

The hours passed with our heads out the window, intimating politics as the train crept towards Belgrade slower than the bottle disappeared.